Editor’s Note: Although the information published by the Drummond Island Digest focuses on the Eastern Upper Peninsula, once in a while there is a story that is of importance to all readers, even though it is not “in our backyard.” This story about the shipwreck Argo and the possible environmental threat it poses, is one of those stories.

TOLEDO: On Sunday, October 25, 2015, the National Museum of the Great Lakes (NMGL) in conjunction with the United States Coast Guard (USCG) and the National Oceanic and Atmospheric Administration (NOAA) held a joint press conference on the discovery of the shipwreck Argo, a tanker barge lost in 1937 in Lake Erie with initial reports of 100,000 gallons of crude oil as its cargo.

In 2013, the NOAA (Office of National Marine Sanctuaries, Office of Response and Restoration) issued a Risk Assessment Report identifying the Argo as the greatest potential environmental threat by a shipwreck on the Great Lakes should her structural integrity fail and her cargo of petroleum product escape into the lake. NOAA, in their report on the Argo, acknowledged that their analysis was incomplete because it lacked critical information about the shipwreck including its precise location in Lake Erie.

On August 28 of 2015, the Cleveland Underwater Explorers (CLUE), operating under a cooperative agreement with the National Museum of the Great Lakes, located the exact location of Argo during its annual shipwreck search program. Operating under this cooperative agreement for the past decade, CLUE and NMGL have been responsible for locating and identifying over a dozen shipwrecks in Lake Erie including the Anthony Wayne, the Cortland, the Riverside, the Sultan and the Plymouth. Mr. Tom Kowalczk of CLUE discovered the exact location of the Argo using side scan sonar technology.

Christopher Gillcrist, Executive Director of NMGL, stated “The Cleveland Underwater Explorers are the finest shipwreck search team operating on Lake Erie. We are proud to be associated with a team of such talented individuals.”

Upon discovery of the shipwreck Argo, both CLUE and NMGL decided to turn data related to the discovery including the location to the USCG for action. Since notification of the exact location, the USCG implemented a

plan of action to assess the wreck site. A USCG contractor sent a dive team to the site on October 21, 2015. Representatives of the Coast Guard will speak to their work to date on the wreck site.

Christopher Gillcrist stated that the “speed at which NOAA, the United States Coast Guard and other agencies have reacted to the discovery of the Argo is remarkable. When so many people have little faith that government can be effective, efficient and timely, the Argo experience proves the opposite. This collaboration between government and the not for profit sector is a powerful example of the success that can be achieved for the benefit of hundreds of thousands people whose health and livelihood depend on the waters of Lake Erie.”

The formal identification of the wreck as the Argo was completed by members of CLUE, David VanZandt and Tom Kowalczk, on Friday October 23, 2015. The team conducted a preliminary survey of the wreck noting ship typology, ship dimensions, and the presence of particular pieces of equipment known to be on the barge. The team noted the presence of petroleum product escaping to the surface. CLUE and NMGL immediately contacted the USCG concerning the potential threat.

Representatives from the USCG were to be on hand to describe the next steps related to the potential threat of Argo. 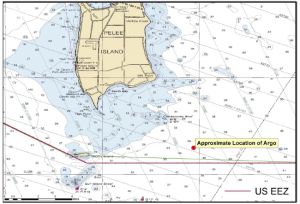 The Argo is located approximately 12 miles north of Sandusky, OH in US waters. Source: NOAA

And Now the Rest of the Story

The entire mysterious story of the Argo, its controversial and perhaps illegal operation on the Great Lakes, the theory behind her sinking, the investigation into her loss, her fortuitous discovery and the proactive federal response by NOAA and the United States Coast Guard, will be published in the winter issue of Inland Seas®, which is available to members of the National Museum of the Great Lakes and its parent organization The Great Lakes Historical Society. Individuals interested in the story can visit www.inlandseas.org to become a member.

Editor’s note: As of press time no further information or action plan was available.

← October Photo Contest Wildlife
Gone to sit in the woods →

Quote of the Month

In the whole world there is nothing softer and weaker than water. And yet nothing measures up to it in the way it works upon that which is hard. Nothing can change it. Everyone on earth knows that the weak conquers the strong and the soft conquers the hard. - Tao Te Ching